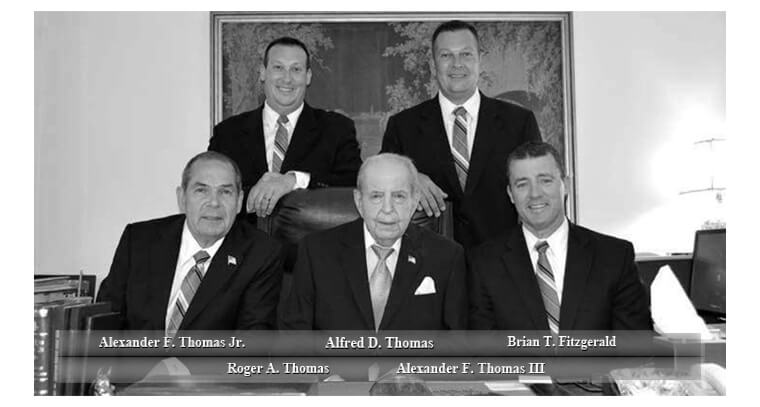 Over the years, Alfred D. Thomas has become one of the most respected members of the community as he has served local families in their times of need and through his involvement in countless civic activities. Today, he is proud to have three generations of his family working together with him.

His nephew, Alexander Thomas Jr., along with his sons, Alex III and Roger, have for many years served the communities of Hyde Park and Walpole through the Carroll-Thomas Funeral Home in Hyde Park and the Alexander F. Thomas & Sons Funeral Home in Walpole. His nephew, Brian Fitzgerald, has served the Canton community through the Dockray & Thomas Funeral Home. Now, the three generations of the Thomas family are working together to serve the families of Milton, Dorchester and Quincy.

For years Al Thomas has been responsible for organizing the East Milton Square holiday tree. His donations to the town have provided the sparkling tree lights as well as covering the cost of labor to decorate the M. Joseph Manning Deck at the Christmas season.

It is no secret that his involvement in Kiwanis Club has been the glue that kept the organization vital. In the past few years he worked to update the facilities at the American Legion Hall – something he continues to care about.

His love of baseball led him to support the Al Thomas A’s, a team that has done well year after year. Anyone who reads Ed Baker’s “With the Athletes” knows Al is known on the horse-racing circuit. His  nephews and grand-nephews are funeral directors who work with him to operate the Alfred D. Thomas Funeral Home at 326 Granite Ave., Milton, MA 02186.

If you need our services immediately, please call us.
We will begin the process of bringing your loved one into our care right away.